These Apple Pie Cinnamon Rolls are the easiest and tastiest apple pie snack! Made with crescent rolls, diced honeycrisp and granny smith apples, and homemade apple pie spice, these are perfect for when you want a delicious cinnamon roll but no time to make them from scratch!

Listen. I love to cook. I love to bake. But making bread has never been anything I’ve learned how to do a whole lot of. If you are looking for a fresh from scratch cinnamon roll recipe, this is not it. What I made here is a cheater’s shortcut way of making some cinnamon rolls dressed up with some apple pie spice and fresh, diced apples.

It doesn’t take many ingredients and it is a super fun way to use a few basic ingredients for an easy tasty apple pie treat. All of the deliciousness, none of the hassle.

When it comes to the fall season’s apple spice vs. pumpkin spice debate, I’m squarely in the apple pie spice corner. I do love some pumpkin, but I feel like apple is so underrated!

There are a lot of similarities between pumpkin spice and apple pie spice. And sometimes the flavors can be similar, almost indistinguishable if you don’t get your ratios right. But today we’re going to focus on the apple side of life. Now, you will almost always see cinnamon, nutmeg, and allspice involved when it comes to apple spice. And you will certainly make some tasty cinnamon rolls here if you use just that. But if you want to take your flavor profile to the next level, don’t overlook the cardamom.

Cardamom is such a nice compliment to these warm spices and will really add a lovely fall spice feel. Adding the cardamom and omitting the clove and ginger that is normally in pumpkin spice will really set apart this flavor from its fall time competitor.

If you don’t have cardamom or don’t want to get it because you don’t see yourself using it much, then your apple pie cinnamon rolls will still be delicious. When I made my Puff Pastry Apple Pie Bites, I didn’t use any because I really made that with a bunch of leftover ingredients and didn’t have any. They were still delicious!

The beauty of these apple pie roll ups is that they are super easy and low maintenance. You can use as much or as little of some of these ingredients as you like. You will need:

There are just a few quick steps to get your cinnamon rolls in the oven.

If possible, choose a smaller baking pan so that when you put all of your rolls in the pan, they will touch each other. They will rise up instead of spreading out. Plus, the filling will melt into syrupy goodness and get all in the dough as they bake.

And that’s about it! Quick, easy, and best of all HASSLE FREE apple pie cinnamon rolls. All of the flavor, none of the headache. 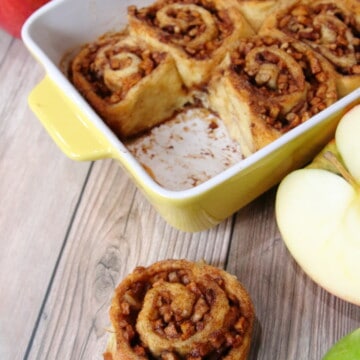 These Apple Pie Cinnamon Rolls are the easiest and tastiest apple pie snack! Made with crescent rolls, diced honeycrisp and granny smith apples, and homemade apple pie spice, these are perfect for when you want a delicious cinnamon roll but no time to make them from scratch!
No ratings yet
Print Pin Share on Facebook Rate
Prep: 10 minutes
Cook Time: 20 minutes
Total Time: 30 minutes
Servings: 8 Cinnamon Rolls
Calories: 228kcal
Author: Lisa Brown