Do you ever have left over scraps from other recipes and you don’t really know what to do with them? That’s exactly how these Puff Pastry Apple Pie Bites happened. I was making my Beef Stew Pot Pie and had some left over puff pastry, so I dug around to see what I can stuff them with, so I grabbed an apple and a tasty snack was born!

For this particular batch, it didn’t make too many, but that’s ok! Sometimes you only want a small snack. But if you wanted to make a ton of these things, that would also be super easy! It doesn’t require a lot, and chances are you have a lot of these ingredients already. I used:

The ease and versatility is one of the appealing things about these. Make as many or as little as you like. With this particular recipe, it only made 5 little bites. But that’s really all I needed! I was just trying to use up the leftover ingredients I had. If you want a lot, just multiple everything! They were incredibly easy. And SUPER tasty.

Don’t forget the butter and cinnamon sugar at the end! I have a blend that I bought so I don’t have to do the work, but it’s only a mixture of cinnamon and granulated sugar, so just mix your own if you don’t have any! It adds a little bit of sweetness and flavor to the end. And it’s pretty! Gotta have that presentation, right? 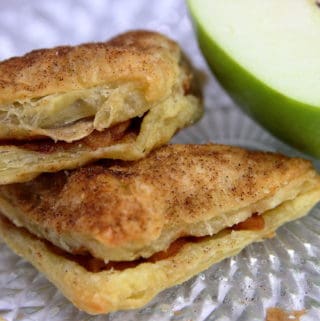