This No Bake S’mores Cheesecake is made with a marshmallow fluff flavored cream cheese, milk chocolate chips, and mini marshmallows and topped with chocolate syrup and toasted marshmallows.

Cheesecakes are some of my favorite desserts to make, but I’ve never made a no bake cheesecake. However, after making this S’mores Cheesecake, I’m a total believer in the No Bake Cheesecake method. I’ve always done conventional cheesecakes, so I had to do a little research on no bake cheesecake recipes, and after reading a recipe from Sally’s Baking Addiction, I was able to learn enough to modify it to my liking.

What is the difference in a no bake and a conventional cheesecake?

Other than the obvious, one is baked and one is not (duh), the biggest difference in a no bake cheesecake recipe is the lack of eggs. Normally my cheesecake recipes include 2-3 eggs, and this one has none.

The batter in general is much thicker in the no bake variety. A regular cheesecake uses more milk, and with the no bake cheesecake, it uses heavy cream whipped to hard peaks. You don’t have to have a stand mixer to get these though. I regular hand mixer will work just fine.

Putting the layers in your s’mores cheesecake

This s’mores cheesecake is more than just a standard cheesecake topped with some toasted marshmallows. I tried to make sure marshmallow was layered throughout, and the result came out to be a light, smooth, pillowy, marshmallow cream cheese filling.

I wanted to make sure there were pieces of chocolate AND marshmallow, so I layered them along the bottom of the crust.

To get the light and fluffy no bake cheesecake filling, there are a few things to remember:

Once you have smoothed out the cheesecake filling, cover it and let set for at least a few hours. The filling is already going to be very thick, so it just needs to chill for a few hours to let it reach that firmer, smooth, velvety filling.

After your s’mores cheesecake has firmed up, remove the sides of the springform, drizzle with chocolate syrup and add another layer of marshmallows. If you have access to a brulee torch, definitely give those marshmallows a little fire. You can’t have s’mores without a nice toasted marshmallow!

As always, please feel free to ask questions in the comment section below.

Not a believer in the no bake cheesecake method? Try this Spiked Eggnog Cheesecake! 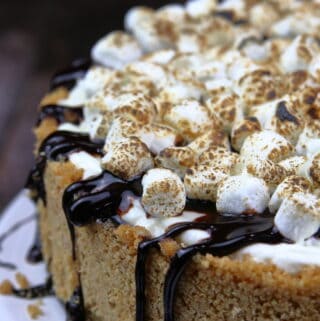 To make the crust

To make the Filling