I will admit, I’m not a super adventurous drinker. I pretty much stick to hard ciders, wine, prosecco, and flavored vodkas. Every time I go to the liquor store, I love to look at the vodka aisle and come up with some ideas for flavored vodka recipes.

I’ve had this bottle of raspberry vodka for quite some time that I never finished. I used it to make a delicious raspberry lemonade vodka spritzer, and it is also delicious mixed into sprite, but I wanted to experiment with some more raspberry vodka recipe ideas.

Prosecco is a definite staple at my house, and I do love a crisp glass of LaMarca, but like the raspberry vodka, I like to experiment with a good prosecco cocktail.

What exactly is a martini?

The classic, traditional martini is a gin and dry vermouth cocktail. You can use vodka instead of gin, although some martini purists reject that idea.

So is this raspberry martini actually a martini?

In the traditional sense of the martini, no, not really. This is probably more of a prosecco cocktail (or champagne cocktail if you prefer), but the term martini has been stretched and applied to so many different kinds and flavors of drinks that aren’t true martinis- i.e. the lemon drop or the appletini.

I’ll tell you what this raspberry martini IS though… DELICIOUS.

All you will need is:

Putting together your prosecco cocktail

And that’s pretty much it! With fresh raspberries, fruity raspberry vodka, and bubbly prosecco, You have a crisp and refreshing sparking raspberry martini with just a hint of sweetness. And bonus, it’s a pretty pink cocktail! 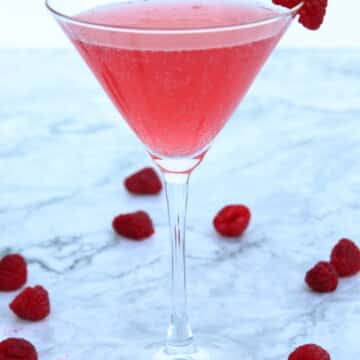