This is my favorite way to prepare a simple side dish of spaghetti squash. A healthy and delicious veggie recipe that goes well with just about everything! It’s such a delicious and easy vegetable side dish. Another bonus? It’s a low carb. I don’t follow a keto diet, but I’m always wanting a stash of ready to go low carb recipes.

Aaaaaaanyway. Spaghetti squash is a versatile little thing, so there are tons of possibilities. Oven baked spaghetti squash is especially delicious. Many people use it as a pasta substitute by topping and tossing it just as you would any bowl of noodles. You can mix it with other veggies, make a pasta bake, use it’s own shell as a bowl and throw in some seasoned ground meat, or toss it in a stir fry. But I’m a bit of a purist with my fake spaghetti. Just some olive oil, some salt, pepper, and other spices and you’ve got a tasty side veggie that goes with anything! The best part is after you get it all seasoned up, you toss it in the oven and let it do it’s thing! I’ve known some people to have success cooking it in the microwave. Personally, I’ve never tried that.

Once you get the hang of cutting the thing, it’s really suuuper simple. First, you need a really big, sharp knife. I know. Duh, right? But really. If your knife isn’t really sharp, you might be in for a bit of a frustration. I much prefer a non-serrated knife. You won’t be able to get much “sawing” action with your knife because the squash hugs it super tight preventing it from moving much (ooor can we say it…squashes it? Ok I’ll stop.)

Using a non serrated knife, wedge it straight down the center cutting it exactly in half, similar to how you would split firewood. If your squash is particularly stubborn, you might have to go outline the perimeter of the flesh with the knife instead of straight down. Once you have it split into halves, carve its guts out!

Seasoning and baking the spaghetti squash

Now is the tasty part. Once the spaghetti squash is empty, drizzle a couple of tablespoons on that bad boy and slather it around. I use a silicone pastry brush (paid link), but I’ve actually used my hands before, too.

After it’s covered in olive oil, sprinkle it (more like COAT it) with whatever spices you like. I use a GENEROUS portion of my favorite cajun spice blend. I have a variety of cajun spices in my cabinet, but my one true love is good ol’ Tony Chachere’s (paid link). It’s got a mix of salt, pepper, garlic, cayenne, chili, mustard, celery salt, an other magic deliciousness, so it really packs on the flavor. After you give it a good shake of Tony’s, add a little more salt and pepper just for some added oomph. You might want to drizzle a touch more olive oil on top and smear it around so you make sure everything mixes together and sticks.

Once it’s seasoned to your liking, put it gut side down on a baking sheet or cake pan. I usually use a 13×9 glass pan for no other reason than that’s what I usually grab first. You can pretty much use whatever it fits into. Toss it in the over uncovered and bake for about 40 minutes at 375F. You can tell it’s done when a steak knife pierces it and pretty easily goes all the way through, similar to how you wold test a potato (side note: I don’t pierce it before baking. Some people do, I’ve just never found the need. Six in one hand, half a dozen in the other).

After baking the spaghetti squash

After it is finished baking, remove the squash from the oven. To get the goodness out of it, you can hold it up and stand it on its side (but it’s HOT), or just lay it in a bowl and use a fork to scrape all the goodies out. If it’s cooked all the way through, you’ll be able to clean it out pretty much all the way to its shell. The seasoning will be concentrated to the part that it made contact with the initially. Just stir it around really well and it’ll disperse.

Sprinkle a little more salt and pepper on it if you feel like it needs it, and voila! There you have it. Stringy, veggie goodness. Extremely flavorful, tasty oven baked spaghetti squash. Mostly healthy, fully scrumptious.

Love spaghetti squash but want to dress it up a little bit? Try this Vegetarian Spaghetti Squash Pasta Bake. 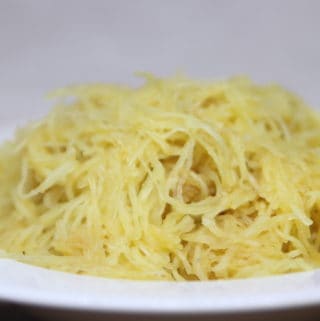 This is my favorite way to prepare a simple side dish of spaghetti squash. A healthy and delicious veggie that goes well with just about everything!
5 from 2 votes
Print Pin Share on Facebook Rate
Prep: 10 minutes
Cook Time: 40 minutes
Total Time: 50 minutes
Servings: 6 people
Calories: 50kcal
Author: Lisa Brown

Tried this recipe?Mention @asystemofabrown or tag #systemofabrown!
If you don’t have (or like the spice level of) cajun seasoning, garlic and onion powder mixes deliciously with spaghetti squash. I’m a huge fan of loading up on spices in addition to just salt and pepper.